Diversions for You and Your Friends is a feature of the blog, which appears every Monday. To find out more about Diversions, read the Introduction and Number 1, or you can visit the Diversions Archive.

My reaction to the staircase diversion pictures I bring you today is quite different than it would have been forty years ago. Then I was still able to hike in the mountains and climb stairs without much effort. Then I could imagine myself climbing up many, but not all, of the spectacular stairs in the pictures below.

That isn’t the case any more. I now use a cane and a walker! But I can still admire the engineering of stairs both in the wild and spectacular outside and inside beautiful buildings.

Which one would you most like to climb, if you still could? While there are several that are most impressive for the natural setting in which they are built, I would like number 17, the steps on 16th Avenue in the Golden Gate Heights neighborhood of San Francisco with its massive mosaic.

1. Staircase at Lello Bookshop Portugal – This interesting grand staircase in Lello Bookshop in Portugal stands ominous and heavy. The steps are like two channels pouring and swirling to a single point. The side view gives you a closer idea of the immense curves and giddy sinking feeling of each step.

2. Stairs to the sea, Spain – This beautiful staircase is located on the island Gastelugache in Spain. This tiny island in the Bay of Biscay belongs to the municipality of Bermeo in the Basque Country. The staircase leads to the hermitage, which was built in the 10th century. The staircase has 237 steps. It is best to visit these places in the fall or spring to enjoy the peace and beauty of the environment. In summer there is usually crowds. 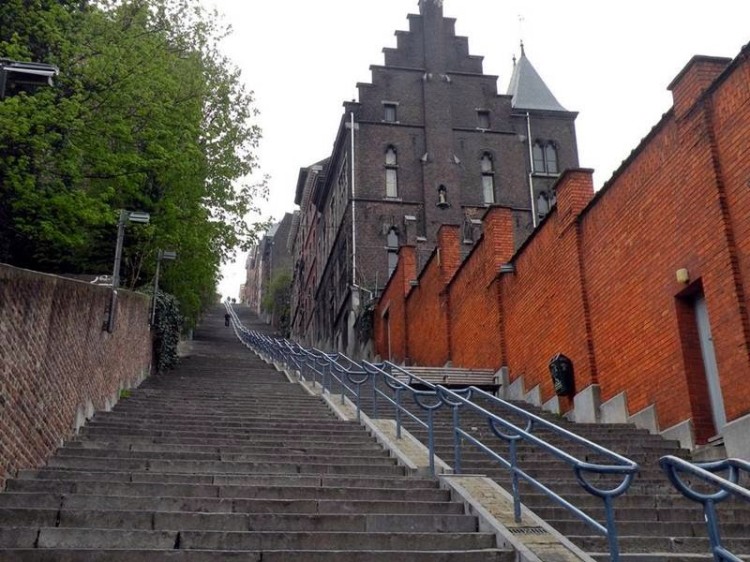 3. Mountain in Belgium Buren Buren Mountain — not a real mountain, but the name of the stairs. It consists of 374 steps and is located in Liege. The staircase was built in 1881 to allow the soldiers to go down into the city center to the hill while avoiding dangerous ways. The stairs were named for the 15th century aristocrat Vincent de Buren, who defended the city of Liege from an attack by the Duke of Burgundy. The almost ruined citadel near Mount Buren was formerly a stronghold to protect the city. When you climb to the top, you’ll be rewarded with spectacular views of the city and the river Maas. 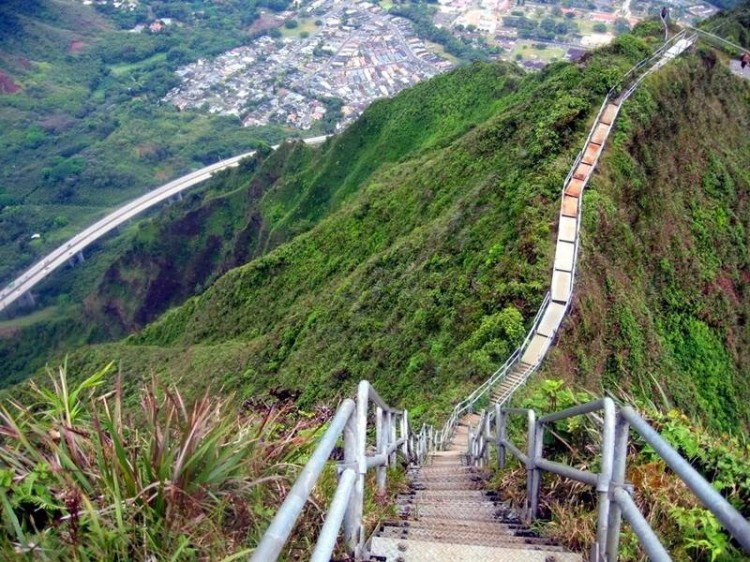 4. Haiku Stairs in Hawaii – Haiku Stairs, also known as the stairway to heaven, is a steep hiking trail on the island of Oahu, Hawaii. The trail starts as a wooden staircase leading to the cliff on the south side of the Valley of Haiku. The staircase was installed in 1942 to stretch the cable from one side to the other rocks. This was necessary in order to provide a continuous link to the naval station at an altitude of about 850 metres. In 2003, the staircase was restored at a cost of 875,000 dollars in the city. But [owing to] outstanding issues of land use, the city and county of Honolulu, currently there is no plan to open the stairs for public use.

5. Bridge over Traversinertobel – Bridge Traversinertobel staircase through one of the slopes of the Via Mala, is the latest structure of this type developed by engineer Dzhyurgom Konzettom and his partner Rolf Bahofnerom. They solved the problem of connecting two different heights of the gorge, creating a ladder. The staircase replaces a rope bridge for travellers, which was destroyed by a landslide. The new pedestrian bridge covers a distance of 56 metres in height with a vertical drop of 22 metres between the two slopes.

6. Universe Cascade Scotland – Cascade universe located on the hillside along the gardens of Dumfries in Scotland and consists of a series of steep steps. Large sites with viewing benches were installed on each flight. You can simply enjoy the beauty of nature, or relax while lifting. The staircase begins at the pond and leads to a beautiful pavilion upstairs. Although private gardens, they open to the public once a year.

7. Chand Baori Well, India – Chand Baori structure is located in a village near Jaipur Abaneri, India. The well was built in the year 800, his narrow 3500 steps in 13 floors extend to 30 metres underground. Rajasthan is extremely arid, so the Shand Baori structure was designed to save water. At the bottom of the well remains in the air 6.5 degrees cooler than at the surface. This place was used as a resting place for local residents during heat waves.

8. Stairs Santorini in Greece – in 1715 island residents built steep stairs on the steep hillside, so they could get from the sea to the summit and back. To help carry cargo and passengers from ships to the city, they used donkeys. In 1930, the stairs were improved, and involved more donkeys. Finally, in 1979, was installed ropeway to automate the process — but the most interesting trip — still walk on a donkey. Zigzag stairs from the sea to the city paved with stone, and because of the many convolutions of the distance from one end to the other is 1300 metres. In total there are 657 10-cm steps and the climb provides a very good workout on a sunny day. Santorini has a special place among the sights of Greece.

9. Stairs Awaji in Japan – Awaji Yumebutai (Ladder of Dreams) is a complex of buildings and other structures located on the island of Awaji in Japan . One set is 100-Awaji tier garden, consisting of 100 beds and stairs. The complex was built as a memorial to the Great Hanshin Earthquake (1995). Construction was carried out on the side of the mountain, which was half demolished in the early 90s. Its stones were used during the construction of artificial islands in the Bay of Osaka. 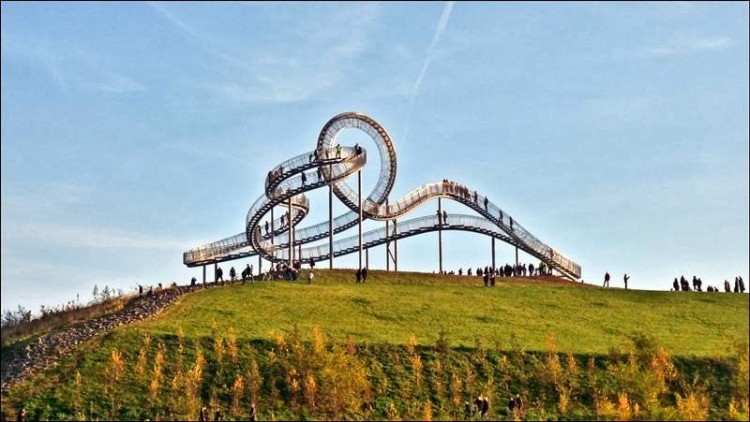 10. Tiger Turtle Stairs Germany – This sculpture is 21 metres tall and was named Tiger Turtle, it is located on a hillside in Duisburg, Germany. Steps meander along the frame of steel in a spiral manner, culminating in a dead loop. Visitors can climb the ladder in Duisburg, but not in the center of the loop that allows you to go full circle. 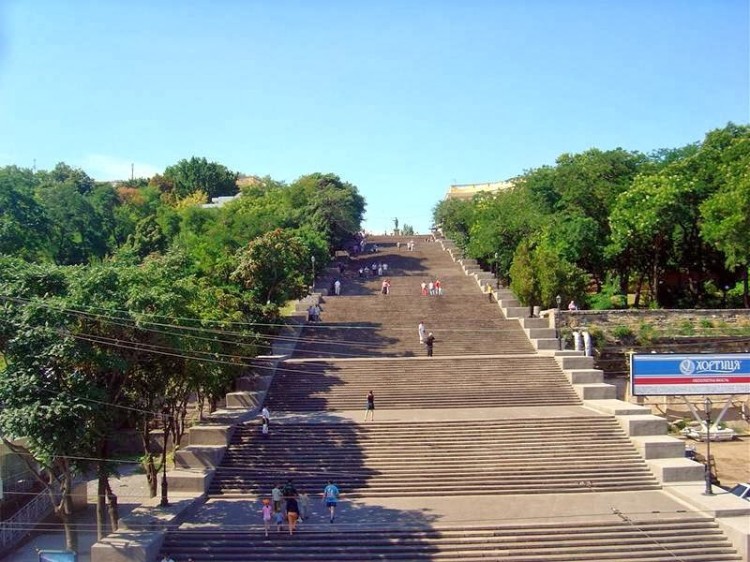 11. Potemkin Stairs in Odessa – Potemkin Stairs – a giant stairway in Odessa , Ukraine. Ladder consider formal entrance into the city from the sea, it is the most famous symbol of Odessa. It was originally known as the ladder Richelieu . The top step is 12.5 metres wide, and the lowest – 21.7 metres. Ladder height – 27 metres and the length – 142 metres, but because of different widths above and below creates the illusion of greater length.

12. Steel Sculpture Art Germany – is a wonderful peace of art designed by Olafur Eliasson. This beautiful merging of art and architecture is a 9 metre-high walk-double spiral of steel in the entrance of the KPMG ( a global accounting firm ) office building in Munich , Germany. The stair is called Umschreibung (Rewriting), and was completed in 2004.

13. Miraculous Staircase of USA – This is the miraculous staircase of Saint Joseph at Loretto Chapel in Santa Fé , New Mexico, U.S.A., which, after 134 years since it was built in 1878, still confounds architects, engineers, and master craftsmen in the physics of its construction and remains inexplicable in view of its baffling design considerations. The unusual helix shaped spiral staircase has two complete 360° turns, stands 20 feet high up to the choir loft and has no newel (center pole) to support it as most circular stairways have. Its entire weight rests solely on its base and against the choir loft — a mystery that defies all laws of gravity, it should have crashed to the floor the moment anyone stepped on it, and yet it is still in use daily for over a hundred years. The risers of the 33 steps are all of the same height. Made of an apparently extinct wood species, it was constructed with only square wooden pegs without glue or nails. At the time it was built, the stairway had no banisters. These were added 10 years later in 1888 by Phillip A. Hesch at the Sisters’ request. 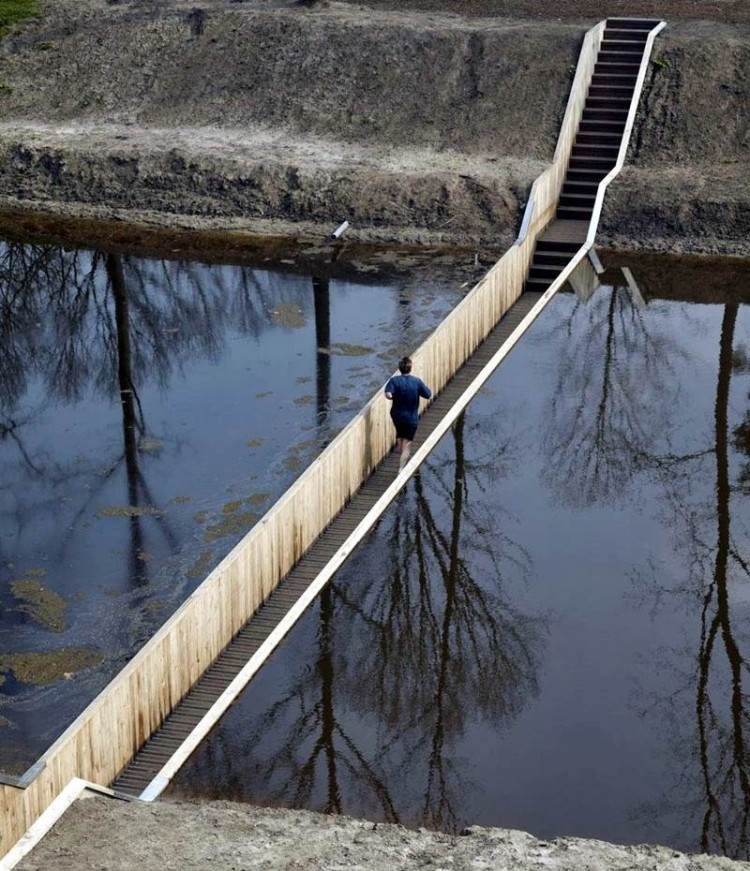 14. Moses Bridge Netherlands – In the early 17th century Fort de Ruver was surrounded by a moat and was originally built without a bridge. But during a recent restoration program has [required] the construction of the bridge. Out of respect to the original fort insular status Dutch company RO AD Architecten built the ladder bridge Moses. The original “sunken” bridge literally merges with the water line. As a result, the almost invisible bridge partially submerged pedestrian moat. The originally protective zone was flooded with water deep enough to impede enemy advance, [but] was still shallow enough to prevent effective use of boats.

15. Spiral Staircase China – [Stairs’ height 91.5 metres] installed along the mountainside in Tyayhan Linchzhou , China. It offers the thrill of climbing without any danger. [Hiking] up the stairs does not require additional training and equipment. Here you will feel the full force of the wind, the birds will fly past, and steps will creak. It’s much more interesting than the rise in the elevator. However, due to issues of safety and health, you must agree to a number of conditions. Climbers must be under 60 years of age and must complete a form confirming that they have no problems with the heart or lungs.

16. Stairs in Austria Schlossberg – Graz main attraction – Schlossberg (Clock Tower). It stands proudly and is visible from all points in the city. Tourists and locals climb to the top to enjoy the incredible views of Graz and the surrounding area. Stairs Schlossberg is located at the far end [Schlossbergplatts]. An impressive staircase carved into the rock and leads to the top of the hill to the clock tower. 260 steps of stairs is not very difficult to climb, but anyone can use a lift.

17. The 16th Avenue Steps, San Francisco – At the corner of Moraga Street and 16th Avenue , in the Golden Gate Heights neighborhood of San Francisco, is the base of the most beautiful staircase in the entire city. A brightly-tiled panel caps the front of each of the staircase’s 163 steps, and as the stairs stretch up the hill toward 15th Avenue , the individual panels blend together to form a single massive mosaic. Stunning in its entirety, yet intricate and detailed enough to offer bountiful rewards when viewed up close, the 16th Avenue steps are a treasure shared by the people living in the Sunset District. 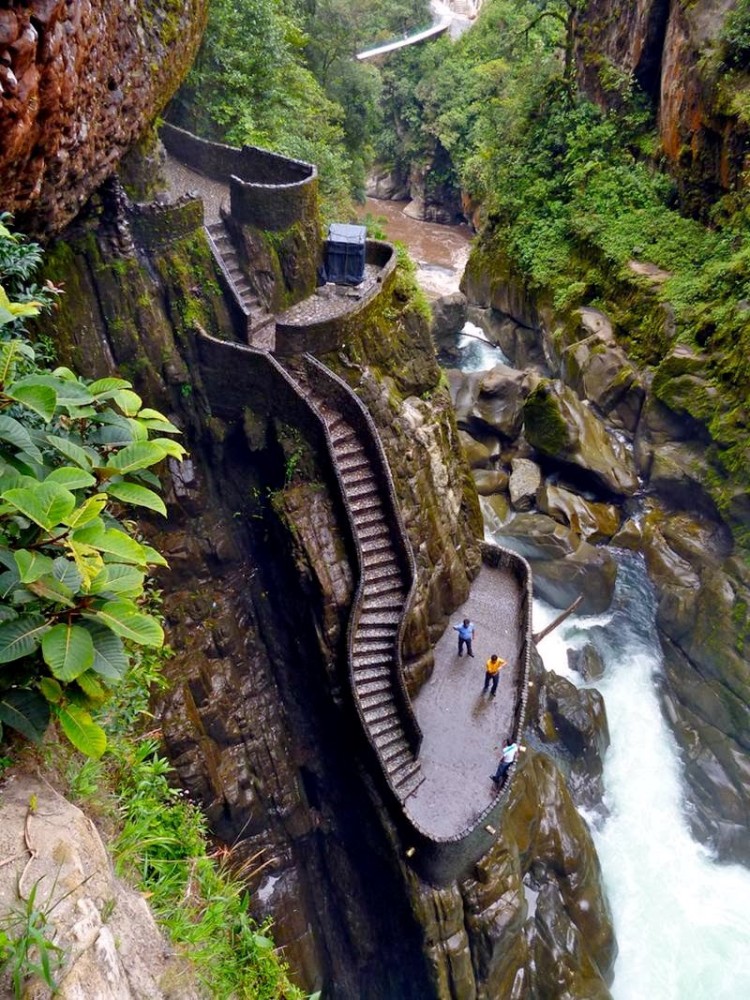 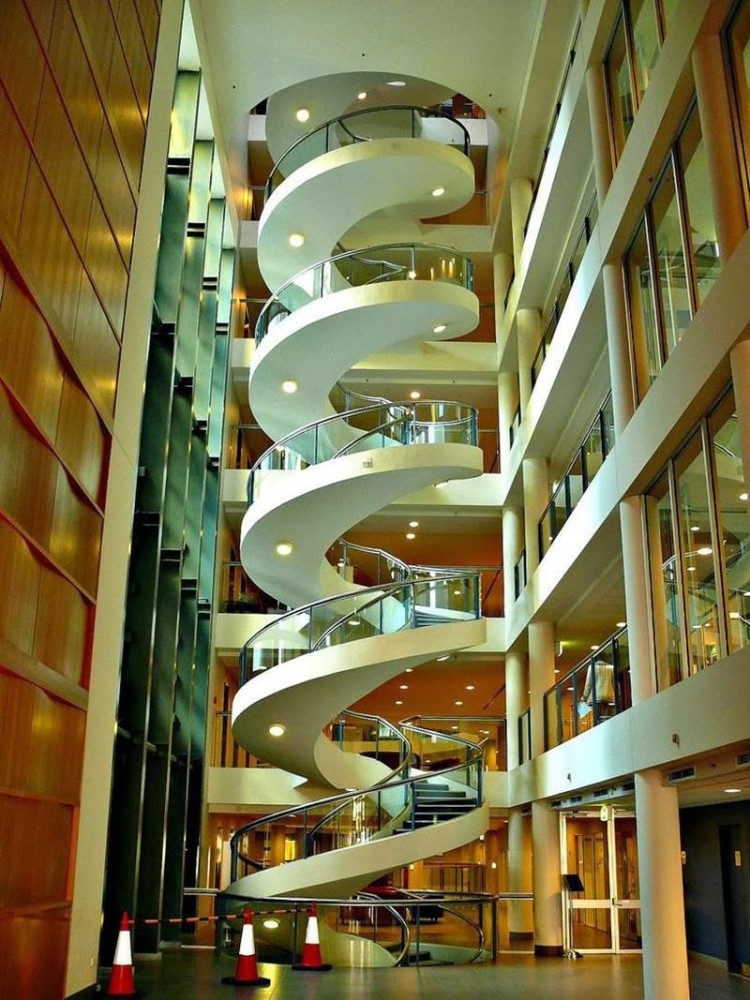 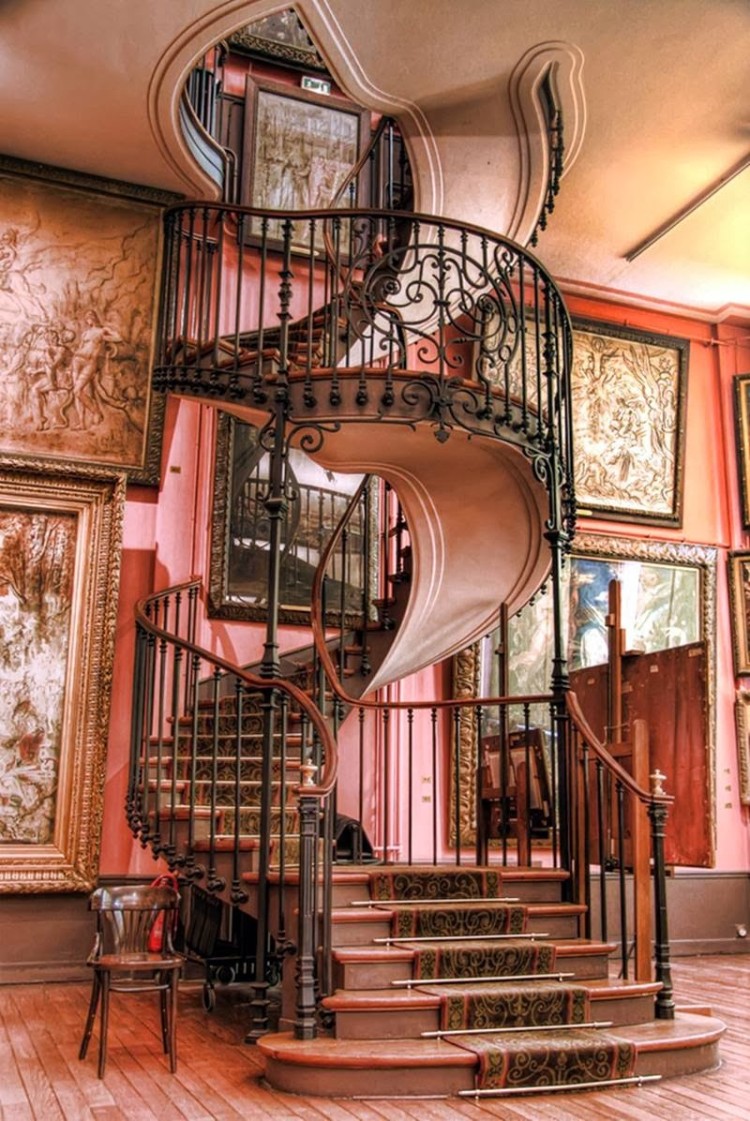